Supercow is the superheroine alter-ego of 7 year old Cow.

A superheroine with superhuman strength, near-invulnerability, and the ability to fly.

Supercow's powers lie in a green blanket that she wears as a cape, and her costume is purple with a logo on the chest which slightly resembles that of Superman, but with a C instead of a S.

Inexplicably, she speaks Spanish. Her catchphrase is "¡Supercow al rescate!" ("Supercow to the rescue!") (in the Spanish edition of the show, she speaks the catch phrase in English).

Cow first became Supercow in the Pilot, "No Smoking", where she had to rescue Chicken from Red Guy and Cerebus.

SuperCow also happens to don a tricycle in some episodes, i.e Field Trip to Folsom Prison, where she replaces Chicken with the real red. 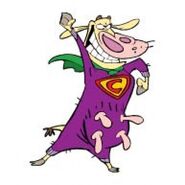 Add a photo to this gallery
Retrieved from "https://cowandchicken.fandom.com/wiki/Supercow?oldid=7773"
Community content is available under CC-BY-SA unless otherwise noted.