The Red Character (also known as The Devil, (various aliases), Red) is a sometimes villainous or mischievous character who acts as Cow, Chicken, I.M. Weasel and I.R. Baboon's incompetent arch-nemesis throughout the series.

He is usually seen naked and was originally portrayed as the Devil in the pilot episode where he attempted to tempt Chicken into smoking and lure him down to Hell. In later episodes, he seems to be portrayed as merely a red-colored weirdo who spends his time trying to either scam, torment, physically harm, or outright kill Cow and Chicken. Later in the series, despite the long history of animosity between them, Cow, Chicken, and the Red character are portrayed as friends or at least on neutral terms in some episodes. He displays odd mannerisms (such as rolling around on the floor or walking on his buttocks to get around) and uses very exaggerated tones in his speech. He is prone to extreme mood swings, often going from smooth and witty to loud and ranting in an instant. He often disguises himself as an authority figure (principals, kings, queens, lunch ladies, police officers and other things.) and wears disguises such as small shirts, wigs and short skirts. In some episodes, multiple and seemingly distinct Red characters are present, usually working together, which raises the question of whether or not the Red character in each episode is a different one each time.

Catch phrases. include: "Hello, it's me, the Red character ", "I'm going to be rich", "Fetching!", "Why the long face?" if Cow is crying, "Sue me," "Ooh," "You know", "Can you be helped?" when disguised as a store clerk, and "Is that a crime?" Like the other characters in the show, Red character will refer to everyone else as "ladies," "girls," "gals," or "men." A running gag throughout the series deals with the fact that The Red character does not wear pants (or underwear), and seems to take pride in his buttocks and his nudity similar to a nudist (After all, nudity is the sincerest form of flattery). In fact, he often goes to extreme lengths to stay nude. In one episode, he erased nearly every character in the series because they made him wear pants which knocked him off balance. Some rare exceptions occurred in “Intelligent Life?” when after establishing world peace Red asks to keep the jeans he has acquired. Upon wearing them he exclaims, “Look at what I have been missing all these years!”. Another exception was in Black Sheep when Cow and Chicken's cousin, Black Sheep feels pity for him because he knows that his grumpiness is because he's cold. Once he put on the woolen pants he made for him, Red character immediately felt warm and showed off his new pants to his fellow officers. Though it didn't involve pants in The Drinking Fountain of Youth Red as NoPants regresses back into a baby at the end of the episode and is wearing a diaper. A lot of The Red character's explanations for why he pulled a certain scam involve something bad that happened to him when he was 9 years old around the time when he was unaware that him not wearing pants at school was inappropriate. The Red character also appeared semi-regularly in I Am Weasel. He is the main antagonist of Supercow and I Am Weasel.

The Red character often introduces himself with fake names emphasizing his lack of pants and exposed buttocks to continue tormenting Cow and Chicken. However, rarely some of his aliases are shown to be separate individuals, showing that there is more than one Red character. Some of them include:

Dr. Laxslax: (The Cow With Four Eyes and Who's Afraid of the Dark?)

Ben Panced: (Penalty Wheel, a pun for Been Pantsed)

Mrs. Barederrière: The lunch lady at Cow and Chicken's school. She has a strange love for serving ketchup based lunches at school.

Geraldo Rearviewa: (Dirty Laundry) The reporter for the school news show who does more harm than help.

Officer Pantsoffski: An orthodontic policeman who appeared in Orthodontic Police that pulled Mom and Dad's car over. Pantsoffski made everyone, including Cow and Chicken get permanent, yet extreme braces. His reign of terror ended when Supercow arrived to save the day and made him endure what it's like to have permanent braces in his mouth. After removing the braces off everyone, Pantsoffski demanded Cow and Chicken to uphold their end of their bargain and remove his braces. Chicken tells him that they would, but they had already sold him as a satellite tracking dish. Pantsoffski was last seen trying to avoid satellites crashing on him and his motorcycle, while screaming "Is there a real orthodontist in the house?".

Officer O'Fannahey: A cop who appeared in Black Sheep. When Supercow was ready to beat him up, Black Sheep stops her by telling her that his grumpiness is because he's cold. He quickly shears his own black wool and used hairpins to stich O'Fannahey a pair of woolen pants. He immediately felt warm in the woolen pants.

Officer Hiney, the Fraudulent Mall Cop: A fake security guard who appeared in Mall Cop. He wrongfully goes after Cow for supposedly shoplifting, when in reality she had already paid for Mom's things. She is cleared of the shoplifting charges when she passed through the security detector, but Hiney wasn't impressed. When he tries to pass through the security detector, it beeps red and the real mall cops busts him for trying to steal their cart. They immediately have him arrested and Chicken taunts Hiney by saying lock him up and throw away the key. Hiney was last seen begging the mall cops to let him join them, but is silenced.

Sonja: (Cow's Horse) A girl who's identity was stolen by Red character.

Principal Hiney: The principal of Cow and Chicken's school. He used the security blanket which is revealed to be Supercow's powers and kidnapped Cow, Flem and Earl. Chicken was able to save their lives as a superhero of his own.

Major Wedgie: An Army Superior responsible for his troops. Well noted for his name is a pair of boy shorts that rode up his bubbly butt cheeks giving him both a serious wedgie and an irritable attitude. Only after removing them does his attitude becomes more positive.

Hiney Beau: An owner of the dry cleaners that was being used as a front in an attempt to find out who Supercow is. Hiney would eventually succeed in figuring out her real identity being Cow and takes her hostage. However, Chicken arrives to save her. The other superheroes arrives to beat up Hiney for their missing costumes.

Warden Red: The Warden of the local prison who on one occasion even imprisoned one of Red character's other aliases.

NoPants DeLeon: The Spanish conquistador sent by the King of Spain to find the fabled fountain of youth who was later tracked down by Weasel and Baboon. During the trip back home NoPants along with Baboon both regressed back to babyhood as a result of drinking from the fountain.

The Red Character is a red naked creature of an unknown species resembling a demon, and in the pilot "No Smoking" episode he was shown as Satan. In later cartoons, he is no longer shown as that character, but instead as a being who is known for masquerading as different people with different occupations in order to harm, torture or scam Cow and Chicken for reasons never established in the series. Often, these characters are given pun names related to the Red character's large bare buttocks and lack of pants, and sometimes he has been known to disguise himself as more than one character in the same episode in order to continue bothering Cow and Chicken, and sometimes I.R. Baboon and Weasel (Red character also appeared In I Am Weasel). 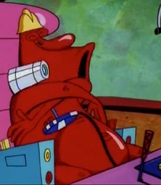 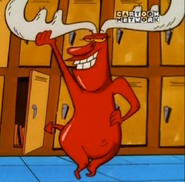 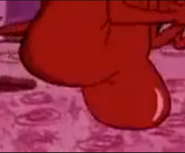 Add a photo to this gallery

Retrieved from "https://cowandchicken.fandom.com/wiki/Red_Guy?oldid=8569"
Community content is available under CC-BY-SA unless otherwise noted.