View source
Welcome to the Cow and Chicken Wiki!

We are a free repository about Cow and Chicken and I Am Weasel, two television series created by David Feiss for Cartoon Network. We are currently editing over 425 articles, and you can help!

About Cow and Chicken

A scrawny, 11-year-old chicken named Chicken reluctantly watches out for his beefy "little" sister, a 7-year-old cow named Cow. The unconventional offspring of two human parents, the two young animals navigate their way through suburbia, encountering problems not only at school, but with the devilish schemes of the Red Character, a crimson-colored antagonist of many guises whose singular intent is to make the siblings' lives miserable.

About I Am Weasel

Originally a part of Cow and Chicken before being spun off into a separate series, focuses on the rivalry between I.M. Weasel and I.R. Baboon, where Baboon's efforts to be the center of attention and attempts to overthrow Weasel are continually undone by Weasel's effortless success. 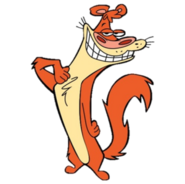 We're an encyclopedia run and maintained by people just like you! Created by fans, for fans, this community is dedicated to building a comprehensive and informative guide to the Cartoon Network series, Cow and Chicken.

Community content is available under CC-BY-SA unless otherwise noted.
Advertisement